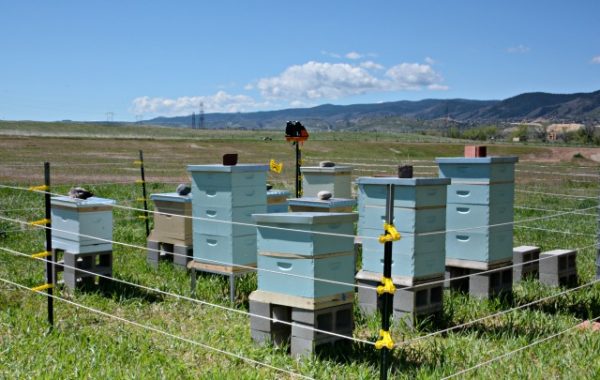 Welcoming the Bees at Seven Stones

The symbiotic relationship marks a unique partnership between cemetery developers and beekeepers in a quest to better the natural environment.

Many people still consider them a summertime nuisance. But at Seven Stones, we’re welcoming the bees; in fact, we’re aiming to make them feel right at home.

The critical importance of bees to our existence is increasingly well-known. As the Natural Resources Defense Council noted at www.nrdc.org:

“Cross-pollination helps at least 30 percent of the world’s crops and 90 percent of our wild plants to thrive. Without bees to spread seeds, many plants—including food crops—would die off.”

But those busy pollinators have been disappearing thanks to a series of largely manmade changes in our ecosystem that threaten the delicately interwoven balance. Fortunately, our eco-friendly philosophy at Seven Stones and the efforts of beekeepers in the Chatfield area have merged to create a symbiotic partnership that will better the environment for everyone. Tending the apiary at the edge of Seven Stones botanical gardens cemetery in Chatfield, on the southwest side of the Denver metro area.

So in mid-April, the Seven Stones crew mowed a space at the southwest edge of the cemetery where beekeepers Goss, Kurt Fennell, and the father-daughter team of Andrew Henckler and Clara Henckler-Davis could set up stone hive stands and empty hives. And about a week later, the first hive was filled with a swarm that was captured and moved from Hudson Gardens botanical gardens in nearby Littleton, Colorado.

The bee team assembled an electric fence around the area, but not for the reasons you might think. The bees still can fly wherever they want, but the fence will help protect them from other threats—wildlife and intruders.

In fact, most visitors to Seven Stones will never notice the hives, set back at the edge of the property. Unlike wasps, which can sting multiple times, honeybees lose their life when they sting, so they have little interest in attacking people unless the queen is at risk.

Just in case—and because one of our team members is allergic to bee stings—we’re keeping an EpiPen on site. But we don’t expect to need it.

As beekeeper Henckler explains, “The location of the hives at Seven Stones is actually a key part of how we minimize the potential for problems for people afraid of or allergic to bee stings. The apiary is located on an ‘island’ on the property: On one side it’s bordered by the High Line Canal, and the rest of the raised piece of land where the hives are located is bordered by a drainage swale. In order to come within 50 feet or so of the apiary, you would have to intentionally cross a natural barrier that frequently has water in it or is quite muddy.

“When bees fly out of their hives during the day, they’re looking for a source of nectar, pollen or water,” Henckler says. “Usually they’ve been told by other bees where the best sources are nearby. So they fly out and head to their destination. Because the apiary is set back and a bit higher than the surrounding ground, they’re very unlikely to come into contact with people on the grounds, unless they happen to be foraging in flowers that people are looking at. Bees that are at work in flowers are very single-minded and usually will take no notice of people or anything else. The distance of the apiaries from the future locations of paths at Seven Stones means that bee-people contact is likely infrequent and will only include a very-busy-and-not-interested-in-you-at-all bee or two at a time, rather than large numbers.”

Beekeepers Kurt Fennell, Clara Henckler-Davis, Mary Goss and Andrew Henckler, left to right, at Seven Stones botanical gardens cemetery in Chatfield, on the southwest side of the Denver metro area.

Since first welcoming the bees at Seven Stones, the beekeepers have expanded the population, moving more bees from other locations and installing new bees that have been purchased for this apiary. In all, there are 10 hives, with room to expand. At the peak of the summer, they hope each hive reaches a population of about 80,000 individuals, which will bring the overall apiary population to about 800,000.

The bees will serve as the pollination crew at Seven Stones, improving the health of our flowering plants and assuring the ongoing natural beauty of the landscape. They’ll also contribute to the growth of a vibrant ecosystem in the botanical gardens.

“If you stop to think about it, how much more natural and full is our experience of a beautiful planted space when you add butterflies coloring the landscape, bees happily working a flower bed along with bumblebees and countless varieties of native pollinators, ladybugs controlling aphids and the visual interest of the more unusual insects like hummingbird moths?” says Henckler. “I’ve spent time in cornfields that have obviously been treated with insecticides, and aside from the stalks of corn, it’s like the surface of the moon. A place like Seven Stones should be a full ecosystem of beauty, not a sterile display of plants.”

There are 10 hives at the apiary at Seven Stones botanical gardens cemetery, with room to expand to 12. At the peak of the summer, beekeepers hope each hive reaches a population of about 80,000 individuals, which will bring the overall apiary population to 800,000.

We at Seven Stones have been thrilled for the opportunity to both give back to the community as well as benefit from the establishment of a source for pollination of our botanical gardens. “We’re really excited to see what comes of this partnership,” says Doug Flin, VP of Planning and Product Development at Seven Stones. “Creating a space that’s welcoming and sustainable is a priority for us.”

It’s truly a win-win for all involved, including those hardworking pollinators. “The bees will enjoy tending the gardens, and we can all enjoy the results of the hard work these bees do for the plantings,” says Goss. “We are honored to be a part of the Seven Stones Cemetery project and are grateful to the staff and owners for allowing us to participate!”